Last night something so remarkable happened on an American Football field that we just had to comment on it and write this short blog to highlight some of the amazing lessons we can take from it. American Football is massively popular in this country but we are fully aware that it might not be your cup of tea or that you just don’t get the rules. Don’t worry we’ll break it down pretty simply (in grey below). If you don’t know the game, what follows might not seem so remarkable but you will still be able to understand the leadership lessons it provides us with.

With just 75 seconds left in the game last night, the Kansas City Chiefs were leading the Cleveland Browns by 5 points. They needed to move the football just 8 inches to win the game. But they only had one shot to do it. If they failed, the Browns would get the ball and would more than likely be able to score a touchdown in the time remaining to win the game. Being a playoff game it was win or ‘go home’ – EVERYTHING WAS THEREFORE (literally) ON THE LINE.

As an added complication the Chiefs were without their talismanic quarterback Patrick Mahomes (the best player in the league) who had left the game shortly after half-time due to a concussion. Instead, in the most crucial position, for the most crucial play of the game, they had a back-up player who had never played in the playoffs before and had never been remotely subjected to this level of intensity. The Browns KNOW what the Chiefs are going to do.

There were only two options. The Chiefs could either get the Browns to go offside and win the game via the ensuing penalty or they would run the with the ball for at least the 8 inches they needed. There were no other options. Everyone in the stadium knew it. The commentators certainly knew it and the Chief’s coaches knew it. The Browns lined up all their big guys on the line, kept their discipline so as not to get the penalty and dared the Chiefs to push against them.

Enter Andy Reid, the head coach of the Chiefs. Last season he had overseen the Chiefs first Super Bowl in 50 years, (think Premier League, FA cup  and Champions League all in one). He calls the ‘play’ and his back-up quarterback retreats 5 yards from the line. The Browns are now completely certain what the Chiefs are going to do – The Chiefs have shown their hand; they can no longer play the ball – the only option they have left is to draw a penalty. All the Browns need to do now is maintain discipline.

But they are wrong – EVERYONE IS WRONG.

The Chiefs play the ball and throw it – (the one thing everybody knew definitely wouldn’t happen). The ball is caught. The Chiefs gain more than the 8 inches they needed and the game is over.

Business Leadership requires that we calculate a risk v reward equation all the time. It’s a moveable feast and rarely are we faced with a choice as stark, with stakes as high as the one Andy Reid faced last night. On the face of it the decision should have been quite easy. The chances of success were high (the ball only had to move 8 inches) and the reward for that success was high – but the price of failure was so catastrophic that the middle ground alternatives must have been so appealing, almost comforting.

Another celebrated American Football Coach, Bruce Arians of the Tampa Bay Buccaneers has a phrase that he lives (and dies) by:

“No risk it, no biscuit” – If you watched the other game last night between the Buccaneers and Saints then you would have seen that philosophy in action. There were occasions that the Bucs ran plays that had a less than a 15% chance of success but that success almost came with a guarantee of points. Arians was prepared to trade lower level success epitomised by moving the ball slowly and surely down field for the big “home-run” plays. However, Arians hasn’t been half as successful in his career as Andy Reid. Perhaps that’s because his approach to risk and reward lacks the consideration that each scenario requires. Arians will always risk it, to the point that many people think he’d risk it even if the reward was a literal, biscuit.

Ultimately, there are no right or wrong ways for leaders, to approach risk v reward scenarios other than maybe we do it in a considered way, particularly when our decisions affect the lives of other people. Those situations are all to familiar at the moment as we are faced with almost daily decisions that impact our team – who we furlough for example and how we approach it – are redundancies needed – do we need to pivot to other products and services or delivery models? All of a sudden we have been faced with multiple stark decisions that test our abilities to process information and calculate risk versus rewards on multiple plains. So what were the factors in this American Football game that lead ultimately to success and what can we take from it?

2. The Spectre of Failure

It’s human nature to seek perfection and we try to avoid failure at almost all costs.

In a previous life, Secret Geek used to work in quite a high pressured, public facing job. There were rarely win/win situations in his work, someone’s interests, somewhere were not taken care of with every decision that was made and his company were often a scapegoat – it came with the territory and lead to and internal motto carefully developed as consolation amongst the team as inevitable complaints rolled in:

It was borne of a macabre humour that was needed to pierce the pressure of a job where failure at some level was almost guaranteed, no matter the situation.

It took a long time (and a fair bit of therapy!!!) but eventually he got his head around the fact that everyone (of a certain age/experience) no matter how well intentioned, is always the bad guy in someone else’s story. FAILURE IS ACTUALLY INEVITABLE! If death and taxes are the only sure things in life, then failure should be added to that list? We are all bound to fail at something in life, in fact we are all bound to fail over and over again – we might as well embrace it.  And when we finally do that, it can bring with it a powerful feeling of liberation. A clarity that frees up our decision making. We no longer have to make perfect decisions. In fact a lot of the time the only thing that’s important is just that we make A decision.

As the leader of his team Andy Reid made a decision. It was all on his shoulders. It was esoteric to the point that if it failed he would have been castigated by fans, sports journalists and bosses, but he made the decision – because he knew he could live with the failure.

In the crucial moment last night Andy Reid could afford to fail. Because he is at the head of the most successful era his club has ever known. He had built up so much collateral with his team, the fans and the club’s owners that he knew that in that moment even if the worst happened the sky wouldn’t fall in. It’s an important point.

Leadership is a hell of a lot easier when you have a track record of success and/or a high level of cultural buy-in which is certainly the case for Reid Sometimes when we feel under pressure or vulnerable, in whatever form that may take, we can become conservative in our thinking and in our decisions. There’s nothing inherently wrong with that, but it is a filter that skews our thinking and can often lead to over complication, hedging and a lack of clarity in everything we do.

There’s no easy way to combat that. Overcoming the spectre of failure helps, as does a learned trust in our own abilities, but these are psychological tendencies that need training and support to change. It’s always useful to be self-aware enough to identify the filters which colour and shape our decisions.

4. The Value of Trust

In the moment last night, Andy Reid took all the responsibility for the decision, but he placed all the execution of that decision in the hands of his players. He placed his trust in the eleven players on the field but the ultimately in the hands of one man – Chad Henne – a part-time, unheralded, rarely utilised back-up to the best player in the league, Patrick Mahomes. And yet Andy still trusted in him completely in the biggest of moments.

He didn’t have to. There were much safer options no one would have blamed him for taking. But even if he’d taken a safer option and the Chiefs had prevailed, at least one player in the team would, in the midst of the celebrations, known he wasn’t completely trusted by his boss.

And the full value of that decision may only be realised next week when Chad Henne may have to take the reins for a full game if Mahomes isn’t fit enough following his concussion. The ripples and the dynamic impact it has on morale will go way beyond the moment. The man Henne replaced tweeted from his bed:

And maybe it is. Maybe the Chiefs believe they can win with a back-up that no-one had even heard of last week? That’s leadership!

Do you trust the intern in your business to come through for you when you really need? Does your answer say more about you than it does them?

5. The Power of a Massive Pair of Steel Balls

then and only then (whether you are a man or a woman and excusing the vernacular ) will you understand the power of wielding a massive pair of steel balls.

This isn’t the same as machismo or toxic masculinity, it’s gender neural. Having a massive set of balls is finally understanding your worth, the value you bring and ultimately the confidence you have in your convictions – win or lose. It’s when you are finally at peace to make the decisions that need to be made as a leader.

Drop us a line: mike@salesgeek.co.uk 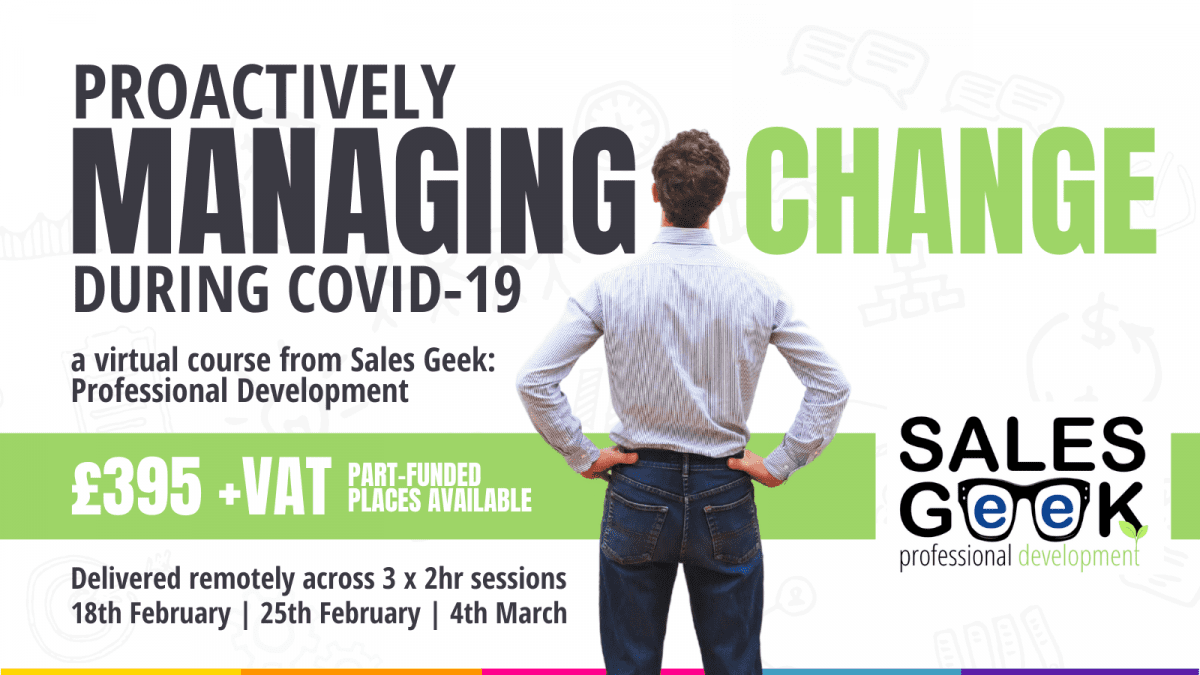